Me, I’m a young 72, my doctor might tell you different, happily married for over 40 years, 3 children, one of each. A  great granddad, don’t think I’ll get to great great.  In my younger days I was by virtue of the armed forces, my Dad in the RAF, myself later on in the Army, a bit of a traveller.  Covered most of western Europe from Norway to the Mediterranean, including Turkey, Cyprus, Malta and Libya. I did get close to the Eastern States, in as much as I fell asleep on a trans European express train, which had departed from Monchengladbach, my destination being well within western Germany. Fortunately it was a west Germany border guard that woke me at the east German border, shudder to think what might of happened had I crossed over? Cost me a small fortune to get to where I wanted to be, excess fare for the distance travelled beyond my destination then what it cost to get me back.

Always had an interest in wildlife, and I am an to this day ardent naturalist in all its aspects, photographing all I observe as records, which, if accepted, are added to various record collecting institutions, and of course the inevitable websites, even had a few published in a few books. My main interest in the field is in all forms of Hemiptera, sought out by using various sampling methods, usually sweeping, or tapping, hate the word beating re the latter. I do venture out most days depending on my health and the weather, not forgetting domestic chores that need attention. However as of late I don’t go far, no more than 3 walking miles there and back. I do consider myself, with regards to my location, a very lucky person. Alluding to the latter, I live in Lincoln City, which is as good a place as any from a naturalists point of view, several lakes, woods, nature reserves, a river, countless streams, three custom parks, and in its day a wildflower meadow right at my back door. Then there’s my gardens’ the place where I became only the second person in the UK to record Zyginella pulchra, the first record was made by Dr. Alan Stewart way down in Sussex in 2001, from memory mine was in 2008. I have had a first for the UK, namely Conostethus venustus, find out more by clicking on the link, thank you.

Where I live now, the City of Lincoln, England,  is not from where I hail, no, I am a Taffy, and that’s another story, suffice to say Lincoln is where I live now, since 1969. I left Wales at the age of 4, from then to 1969 is a period I’ll cover at a later date. I’ll leave an image of a sculpture, which I think was inappropriately titled, ‘Empowerment’.  I have used the title, ‘Liberated’ for indeed that is how I felt when I first arrived in Lincoln. Click on the links for a virtual tour of the City, enjoy!

The Auchenorrhyncha (former synonym: Cicadinea) suborder of the Hemiptera contains most of the familiar members of what was called the Homoptera – groups such as cicadas, leafhoppers, treehoppers, Planthoppers, and spittlebugs. The aphids and scale insects are the other well-known “Homoptera“, and they are in the suborder Sternorrhyncha. Lesser-known insects largely regarded as Homoptera are the Coleorrhyncha. However, the taxonomic status of the Hemiptera and Homoptera is currently under investigation and discussion. See Heteroptera and   for more information.

Distributed worldwide, all members of this group are plant-feeders, and many are vectors of viral and fungal diseases of plants.

It is also common for Auchenorrhyncha species to produce either audible sounds or substrate vibrations as a form of communication. Such calls range from vibrations inaudible to humans, to the calls of many species of cicadas that can be heard for hundreds of metres, at least. In season, they produce the most characteristic and ubiquitous noise of the bush.

The Heteroptera are a group of about 40,000 species of insects in the order Hemiptera. Sometimes called “true bugs“, that name more commonly refers to the Hemiptera as a whole, and “typical bugs” might be used as a more unequivocal alternative since among the Hemiptera, the heteropterans are most consistently and universally termed “bugs”. “Heteroptera” is Greek for “different wings”: most species have forewings with both membranous and hardened portions (called hemelytra); members of the primitive Enicocephalomorpha have completely membranous wings.

The name “Heteroptera” is used in two very different ways in modern classifications; in Linnean nomenclature, it commonly appears as a suborder within the order Hemiptera, where it can be paraphyletic or monophyletic depending on its delimitation. In phylogenetic nomenclature, it is used as an unranked clade within the Prosorrhyncha clade which in turn is in the Hemiptera clade. This results from the realization that the Coleorrhyncha are just “living fossil” relatives of the traditional Heteroptera, close enough to them to be united with that group.

The Gerromorpha and Nepomorpha contain most of the aquatic and semiaquatic members of the Heteroptera, while nearly all of the remaining groups that are common and familiar are in the Cimicomorpha and Pentatomomorpha.

Strolling through my local wood, fading light, nearly dusk. I stopped to look around for I thought I heard a whispering voice. There was no one there that I could see, yet the whispering, it was really close. A little worried I became for the voice, it called my name. I looked up, I looked down, then I spied a toadstool, no two. Then as I bent down to closer look I felt a little breath of air, as what ere it was flew past my listening ear. Momentarily distracted from looking toward the ground, I looked up to see Fairies flying all around. I must confess I was taken quite aback. Then one, it flew toward me, hovered as it said, “We have watched for years, and like to thank you for all that you have done”. They could see that I looked confused, but before I had a chance to speak, and ask them what was going on, they all fluttered by, and thanked me, one by one. I thought as they were leaving, that no one’s  going to believe it,  but then, as if they had read my mind, the one who had thanked me initially, came back and said, “We all understand that your wife,  and friends you’ll tell,  and so that they will believe, we’ve left you a little rose so you can prove that it’s all true”.  Well the wife I gave the rose, not sure that she believes, but just in case you out there think I’m one that might try to deceive,  I took a photo of that rose so all can see how tiny it is. Now what you make of it is rally up to you, all I can say is “I have enjoyed conveying my “Fairies Tale”, to you .

Fairy Tales and Recipes for the Adventurous – FRIENDLY FAIRY TALES 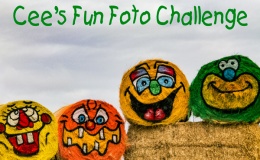 One of my Passion Flower photographs is my entry for the Blue or  Purple flower challenge. Here’s a little about the vine.

Passiflora, known also as the passion flowers or passion vines, is a genus of about 500 species of flowering plants, the namesakes of the family Passifloraceae. They are mostly vines, with some being shrubs, and a few species being herbaceous. For information about the fruit of the passiflora plant, see passionfruit. The monotypic genus Hollrungia seems to be inseparable from Passiflora, but further study is needed.

Excerpt from Wikipedia the free encyclopedia. Text under a  CC-BY-SA license

Reach I try, but the sky so high.

Obsessed, I am, I don’t deny.
Surface rough, or surface flat,
Maybe nether, cant be exact.
Joke I can, you need not laugh
Luxury wow I now have a bath
Paint its my life its what I do
Stubborn sometimes aren’t you
Praise is earned not just given
Craving peace I’ve always striven
Muse on a life better for us all
Profound sure but aren’t we all