Overview: The Zygina genus is distinctive with red zigzag patterns covering the forewings. The patterns are variable, making identification  difficult to species level; care must be taken to look at the right combination of features, and  the use of a microscope  is necessary in some to confirm identification. In instances where 2 or more of the genus are found on the same host then it could be that females may not be possible  to identify to species.
Z. angusta is, as mentioned above, a very variable species, and difficult to separate from Z. ordinaria. In angusta, the male hind tarsus is less than half the length of the hind tibia and the apical segment, and apical half the of middle segments are dark. The scutellum tends to be mostly brown, with the anterior corners and sometimes the midline pale. The clavus is darkened between the red bands (unlike Z. flammigera), the extent of which varies greatly. Length 3 mm

Host plants – Summer: Hawthorns, Crataegus species. Oaks, Quercus species. Not mentioned on the BRC list are Plum, Sole, and I am sure I  have a Zygina species off Cherry all of which belong to the Genus Prunus.  Various shrubs and trees, including roses.

Host plants – Winter: It can be found overwintering on evergreens, ideally on warm winter days when they can be tapped to a sampling tray without causing them any harm. On cold, frosty days it would be best to give them a miss unless of course one is after a voucher when there is less chance of them hopping off. Its overwintering host are as follows: Holly, Ivy, and most evergreen conifers.

Phenology: The statement, “Adult: July to May”, which can be found on a few websites, maybe in some books too, is misleading, and is often given in contradiction to it being mentioned as an overwintering species, which it is.

Distribution: NBN Gateway only have 101 records listed for the whole British Isles. None showing for Lincolnshire, (vc53/54). It is however recorded from the north west of Lancashire coast to  the south east coast, (Sussex). It is sparsely recorded in Wales, there being no records for Scotland or Northern Ireland. No data for the Channel Isles. 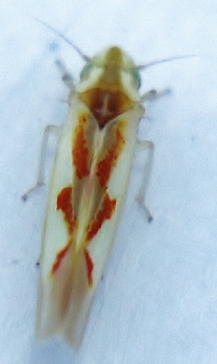